In 1947, two years after the end of World War II, the country was shifting gears from the concerns of war. The veterans were beginning to feel more like civilians again, and attention was turning to more pacific pursuits. In Rockford, Illinois, Ann Marshall Wiley founded the Rockford Writers’ Guild in the fall of that year. According to the earliest bylaws, the purpose of the Guild was to stimulate good writing in this community through fellowship and workshop activities. Dues were set at $1 per year.

Prospective members, if they had not yet been published, submitted samples of their writing to the Steward of Admissions, and that officer would make recommendations regarding membership.

Charter members included Evelyn Johanson Boettcher and Vera Nordquist-Rabe, Howard White who was a long-time good friend of the Guild, and Justina Yankaitis whose daughter-in-law, Mary Lou, was a member of the Guild until she passed away in 2017.

The Sampler, an anthology of poetry by the Guild members, was published from the first year, 1947, through 1958. The cover of each issue resembled a traditional needlework sampler. In addition to writing for The Sampler, several members published their own books of writings. Many contributed to columns in the Rockford Register-Republic and to columns in Chicago papers. Members of the Guild read their work monthly on the WROK radio station. 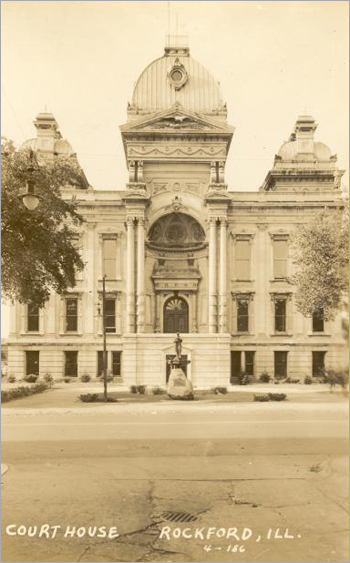 The Guild held an annual poetry contest, and the winning pieces were selected to create a hanging exhibit of poetry to be shown at the Burpee Art Gallery or at the Rockford Public Library. Poems were typed in very large print and the pieces were matted. The best poems were selected for The Sampler.

Poetry round-table workshop sessions were held by the Guild weekly at the Rockford Public Library. Prose round table workshops were held monthly and were not for the faint-hearted. One began at 2:30 p.m. and continued after dinner from 7:00 p.m. to 9:00 p.m. Members also served as judges for high school student writing contests.

Howard White published monthly newsletters, except during the summer. They included writings from members, contests announcements, announcements of members’ accomplishments, news about members, the market, etc.

The Guild was reorganized in the 1960s. Many of the same people who were originally active held again critique groups, workshops, and social events. The Sampler was reborn as The Rockford Review. The format was changed from 4″ x 6″ to 8″ x 11″ and included prose, photographs, and drawings as well as poetry. The covers featured photographs or art work. Volumes appeared in 1971, 1976, 1978, 1981, 1983, 1986, and 1988. Volume VII attracted national attention and was featured in that year’s Poets Market. With Volume VIII in 1989, the Guild committed itself to publishing the Review annually. The format was changed to 5″ x 8″ and it was perfectly bound.

In 1991, The Tributary, usually 24 pages, appeared three times a year for three years in addition to the larger Review, allowing the Guild to publish more writers. Then in 1994, the commitment was made to fold the The Tributary into The Rockford Review to become a tri-quarterly literary magazine with stitched binding. The spring issue of the Review was reserved for the works of members only who submit their best unpublished piece, and publication was guaranteed.

Selections were made from hundreds of submissions from the United States and other countries. One of the issues of The Rockford Review contained poetry and prose from 34 writers from 17 states and from Scotland!